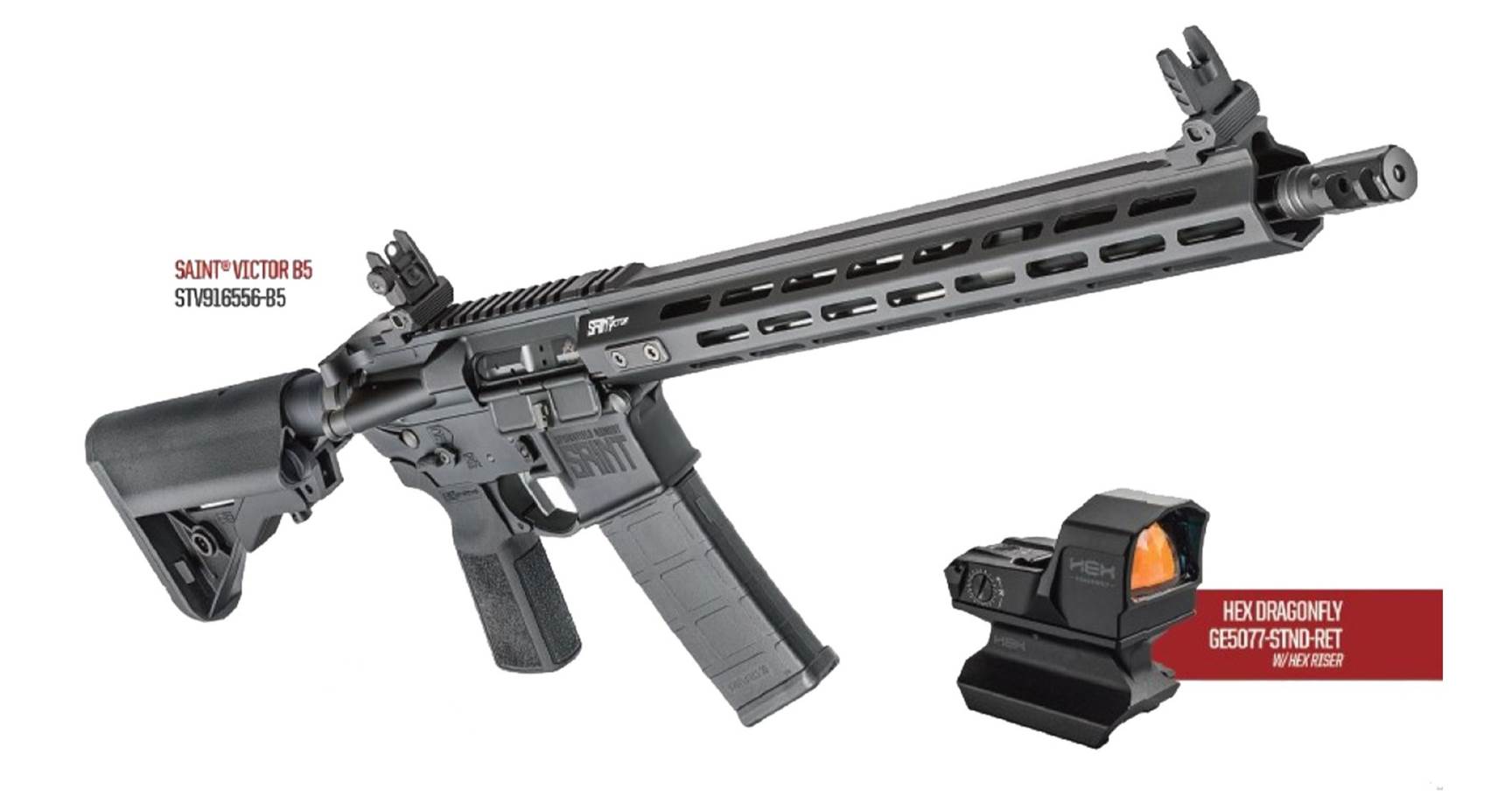 Thanks to Carolina Sporting Arms in Charlotte, the GRNC Political Victory Fund is raising money to kick tail in the 2022 elections by raffling off a choice Springfield “Victor” (B5) M-LOK AR-15, complete with Hex Dragonfly optic.

MSRP on the rifle and optic together is $1399, BUT, IT GETS BETTER!

In addition to the state-of-the-art rifle, the winner gets TWO Magpul PMAG 30-round magazines emblazoned with the now-famous “Let’s Go Brandon” slam on Joe Biden PLUS 200 rounds of ammunition!

For the price of a raffle ticket, you can proudly display your feelings toward the Biden gun ban agenda! “Let’s Go Brandon” spotlights not only the total incompetence of the man and everyone around him, but an enabling media that works day and night to cover his gaffs, missteps and ever-shrinking mental capacity.

Best of all, you not only get a chance to raise a “salute” to gun control leftists everywhere, you will also help GRNC’s federally-registered politically action committee ELECT CANDIDATES who respect the Second Amendment! As you may recall, GRNC is restricted by law from using membership funds to impact elections, requiring us to raise additional funds to “throw da’ bums out.”

So tick off anti-liberty leftists while helping elect candidates who support your rights by buying LOTS of GRNC-PVF raffle tickets!

Why GRNC-PVF is critically important

GRNC is restricted by law from using organizational funds to oust anti-gun politicians. Instead, direct election action is accomplished by our federal political action committee, the GRNC Political Victory Fund, which makes candidate recommendations and conducts “independent expenditures” for or against candidates via radio spots, mailings and automated phone calls.

Buying raffle tickets means that in addition to getting a chance at a Springfield "Victor" (B) M-LOK AR-15, you will help GRNC-PVF keep anti-gunners from occupying offices critical to gun rights.

This will be an e-raffle like we have done in the past. Your ticket number(s) will be sent to you by email, typically within 48 hours.

Drawing will be held on Election November 8, 2022. Winning ticket will be selected by use of a random number generator. The winner will be notified by email or phone (if provided). Winner will have ten days to respond or forfeit prize. Out of state residents need to check local laws and regulations. A NC FFL cannot ship to any place the firearm is not legal.

This raffle will be conducted pursuant to North Carolina law, as determined by a licensed attorney at the time of the raffle based on available guidance (whether advisory letter or Advisory Opinion) from the Office of the Attorney General of North Carolina. Furthermore, only the legality of possession and transfer of the firearm are considered. GRNC makes no representation of the legality of any act(s) by the winner, and takes no responsibility for such acts. As with any GRNC raffle of any firearm, the transfer shall be in accordance with NC and federal law, and occur via a Federal Firearms Licensee (FFL), who shall independently verify the winner's eligibility to receive the firearm. If a winner is legally prohibited from taking possession of the firearm, his or her prize is forfeit and an alternate winner shall be drawn. All costs of the transfer (taxes, transfer fees, shipping, etc.) are the responsibility of the winner.

Officers, Board of Directors of Grass Roots North Carolina, the GRNC Political Victory Fund and Rights Watch International (and their immediate family members) are not eligible to win.